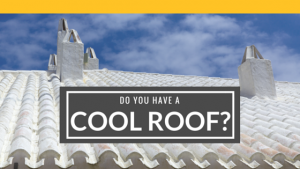 A cool roof reflects and emits the sun’s energy as light back to the sky instead of allowing it to enter the building below as heat. In many climate zones, a cool roof can substantially reduce the cooling load of the building, providing several direct benefits to the building owner and occupants: • increased occupant comfort, especially during hot summer months • reduced air conditioning use, resulting in energy savings and  decreased roof maintenance costs due to longer roof life.

Cool roofs directly reduce green house gas emissions by conserving electricity for air conditioning therefore emitting less CO2 from power plants. Cool roofs also cool the world independently of avoided carbon emissions, simply by reflecting the sun’s energy as light back to the atmosphere, thereby mitigating global warming. A Lawrence Berkeley National Laboratory study found that world-wide reflective roofing will produce a global cooling effect equivalent to offsetting 24 gigatons of CO2 over the lifetime of the roofs. This equates to $600 billion in savings from CO2 emissions reduction.2 Cities can be 2° to 8°F warmer than surrounding areas due to dark materials, including roofs, which absorb the sun’s light energy as heat during the day and release it at night as heat.3 This phenomenon removes the opportunity for air to cool down at night and results in higher temperatures being maintained longer. By immediately reflecting solar radiation back into the atmosphere and re-emitting some portion of it as infrared light, cool roofs result in cooler air temperatures for the surrounding urban environment during hot summer months. Cool roofs, through mitigation of the urban heat island effect and reduction of ambient air temperatures, in turn improve air quality. Smog is created by photochemical reactions of air pollutants and these reactions increase at higher temperatures. Therefore, by reducing the air temperature, cool roofs decrease the rate of smog formation. Lower ambient air temperatures and the subsequent improved air quality also result in a reduction in heat-related and smog-related health issues, including heat stroke and asthma.

Because cool roofs reduce air-conditioning use during the day’s hottest periods, the associated energy savings occur when the demand for electricity is at its peak. Therefore, use of cool roofs reduces the stress on the energy grid during hot summer months and helps avoid shortages that can cause blackouts or brownouts. In addition, for building owners that pay for their energy based on the time of use, they save energy when it is at its most expensive  and hence, save more money! Cool roofs directly reduce the air conditioning use for buildings by reducing heat gain in the building below, but they also indirectly reduce air conditioning use in urban areas by helping lower ambient air temperatures. Therefore, with cooler daytime temperatures, buildings and vehicles use less air conditioning and save additional energy. 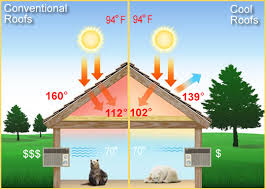 This eco-friendly approach to roofing utilizes basic knowledge to create a more energy-efficient home. Just as wearing lighter colors keeps our bodies cooler when it’s hot outside, a lighter colored roof can help keep your home cool while the sun is beaming down on it.

Call California Home Solar for a free consultation! Our expert technicians will answer any question you may have about Cool Roofs! 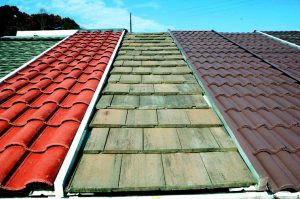 Call us now for a FREE consultation!

Go Green with Your Remodeling Project

Looking to Improve Climate at Home? Upgrading to Low-E Windows Can Help!

CA Home Solar is the daughter company of ATA Contractor Remodeling, which has been in business since 1978. We opened our solar division after recognizing the need for skilled, experienced, and certified installers of solar panels in California. Read More>>